Kerberos is an authentication protocol originally developed at the Massachusetts Institute of Technology (part of Project Athena) and named after the three-headed guard dog who guarded the gates of Hades in the Greek mythology. Kerberos is also an historical wink to as it was first used at the MIT to guard access to the services provided the Project Athena. Kerberos was design is based on the Needham and Schroeder's protocol (Xerox Research Center - 1978) and went through several revisions:

Kerberos has now a long history behind (20+ years) and is widely used worldwide as it brings an elegant, robust and reliable answer to the classic longstanding challenge of having to authenticate and check the access credentials of something in a, by nature, insecure environment:

The Internet is an insecure place. Many of the protocols used in the Internet do not provide any security. Tools to "sniff" passwords off of the network are in common use by malicious hackers. Thus, applications which send an unencrypted password over the network are extremely vulnerable. Worse yet, other client/server applications rely on the client program to be "honest" about the identity of the user who is using it. Other applications rely on the client to restrict its activities to those which it is allowed to do, with no other enforcement by the server. -- Massachusetts Institute of Technology.

Kerberos is a publicly documented network protocol that have the following benefits:

Despite those advantages, having a centralized architecture has a drawback: if the heart of system (i.e. the Kerberos KDC) is compromised, the whole network security is compromised as well. Hence, it is always a good idea to:

Enough of those teasing paragraphs! It is time to give a first big picture of Kerberos. The best is to think about the following analogy and imagine yourself going to watch a film in a cinema: 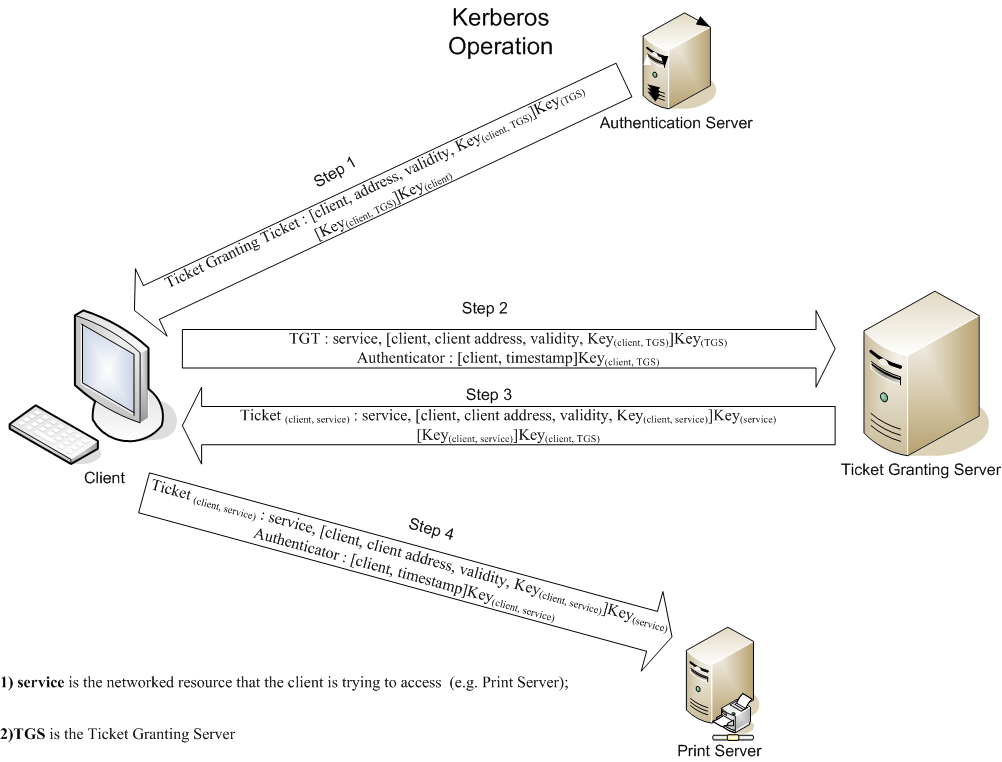 It is important to grab some addition concepts before diving further on the subject because you will manipulate them directly. Some of the definitions below directly comes from various places:

Packages related to Kerberbos in Funtoo

As of writing (april 2011), Funtoo has 3 packages related to Kerberos:

Once app-crypt/mit-krb5 has been emerged, do in /etc and copy the sample configuration file krb5.conf.sample to be krb5.conf and use your favorite text editor to edit. By default this file has the following contents (notice it is divided in several sections whose names are in brackets):

Various other sections and option are detailed in the krb5.conf(5) manual page.

Deployment scenatio #1: Your Funtoo box as a client of a Kerberos KDC

Deployment scenatio #2: Your Funtoo box as a Kerberos KDC

Deployment scenatio #3: Your Funtoo box as a slave Kerberos KDC