Creating Your Own Overlay

More involved developers may want to consider contributing to Funtoo Linux by maintaining an independent overlay.

Traditionally, an overlay is a Portage repository that can be added dynamically to a user's system to augment the available ebuilds and catpkgs. However, with Funtoo it is also possible for our automated scripts to merge your overlay, or parts of it, into Funtoo Linux itself. If you are maintaining quite a few ebuilds, this lets us "pull" from your independently-maintained overlay so that you don't need to submit lots of pull requests via https://code.funtoo.org. So it can be a very serious time savings for developers who are more advanced.

There are two ways to create an overlay that we'll cover. The first is to simply create a local overlay as follows (courtesy seemant, thanks!) 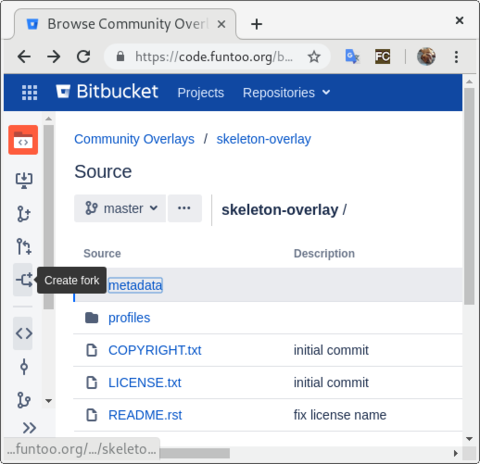 At this point, you will be presented with the next screen, where you should type in a new name for your overlay, disable fork syncing, and click "Fork Repository". 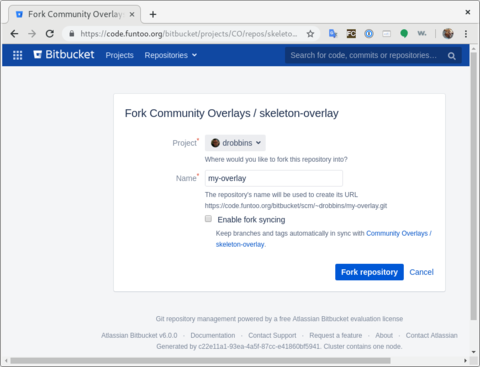 To learn more about code.funtoo.org, please see the following video. We will still need to perform some finishing steps to get the overlay ready for use, which we will cover below.

You will now want to add a ssh key to code.funtoo.org (see video above for more information.) Then, clone it locally, and perform the following steps to properly set the overlay name:

Now is also a good time to review the README.rst and LICENSE.txt and customize as needed.

Now, your overlay is ready for new ebuilds to be committed to it. But before we do that, we should configure Portage to "see" your overlay and any packages it contains.

Create the following file in order to register your overlay with Portage:

The priority key is needed to ensure that your overlay has higher priority to the kit's overlays, which are default priority 1.

Now, you are ready to add new ebuilds that are not present in portage tree or fix the ebuilds from portage tree you are not satisfied with, updating old packages or removing newer package versions.

For example, to create an updated version of the package net-misc/autossh not currently in the repository, create the directory tree net-misc/autossh under my-overlay. In the autossh directory you created, you can add new autossh-x.y.z.ebuild files.