From Funtoo
Jump to navigation Jump to search

IBus(Intelligent Input Bus) is an input method(IM) framework that uses a bus-like architecture. It's widely used in the Linux desktop world and is integrated in desktop environments like Gnome. It allows for different plugins to be installed for input in different languages, this modular design + compatibility with XKB and desktop environments makes ibus the preferred choice for people typing in CJK(Chinese Japanese Korean), Vietnamese, Thai and other languages that require specific tools not found in standard XKB.

Installing ibus is as simple as:

once ibus is installed, you can use it as is because it is interoperable with XKB, or you can install tables and plugins to add additional language support if needed.

Integrating ibus into your Desktop Environment

For KDE the ibus USE flag needs to be enabled for the following packages:

For all desktops you are going to need to add the following code to your ~/.xinitrc or ~/.xprofile

The environment variables will be read by applications which will enable ibus support, the last line starts the ibus-daemon so that you don't have to start it manually

Once ibus is installed, normally there will be 2 ways to interact with it, the ibus CLI and the ibus-setup GUI

The ibus command provides multiple ways of interacting with ibus, for example:

will set the current ibus engine to libpinyin

will list all available engines for every language category, while the control arguments of

will control the state of the ibus daemon

For more information refer to the ibus wiki

To open it, run the command ibus-setup and a window like this should appear: 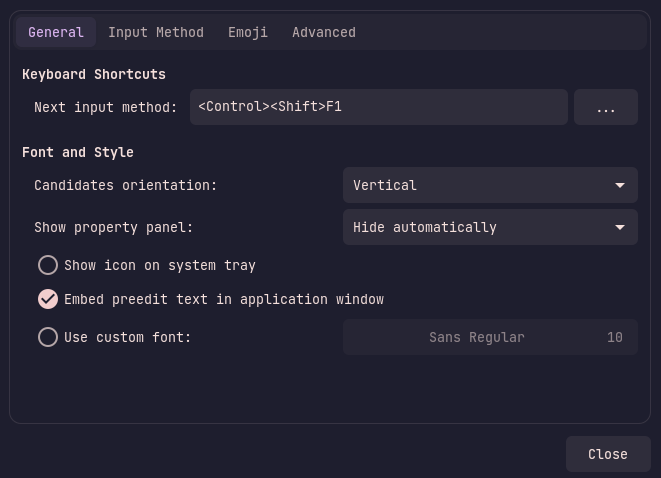 Under the Input Method tab you can find your current input methods. On the side panels you can add, remove, access the settings or information about a given input method. Here is an example image: 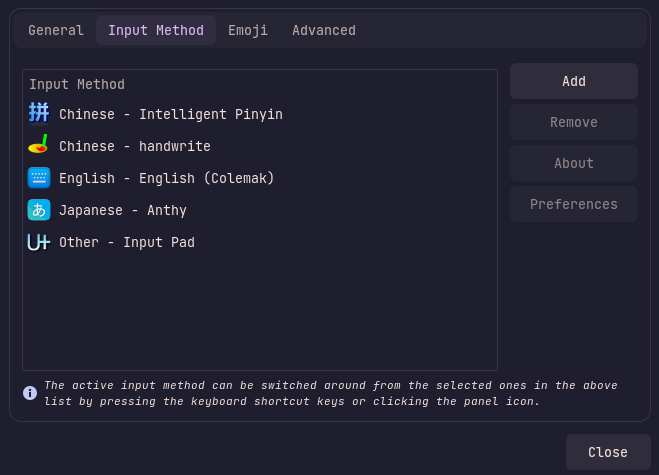 When compiled with the default USE flags, ibus provides emoji input and settings under the Emoji tab, Example image below: 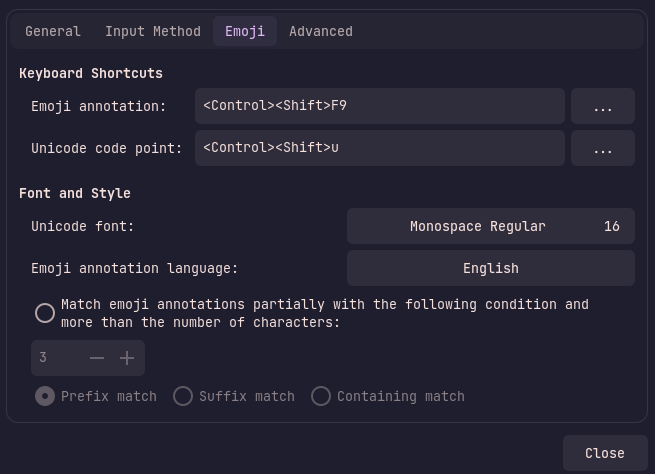 Finally in the Advanced tab you can find settings that allow you to change the theme of the IBus GUI, as well as settings on whether to use the system keyboard layout, and whether to share the input method among all applications: 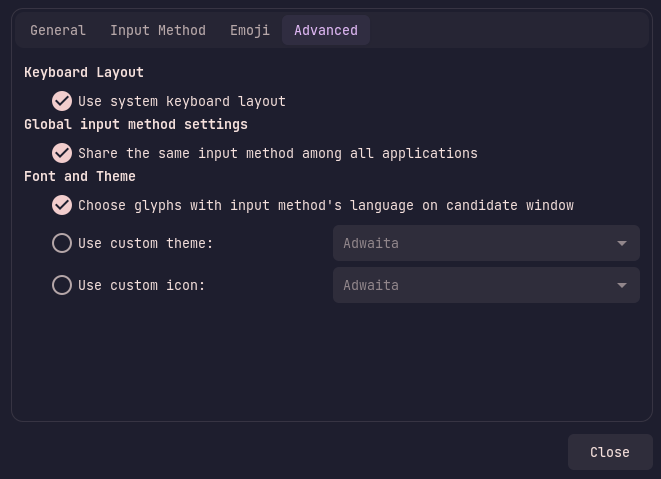 If you depend on running a custom keyboard layout in XKB that isn't available by default in both XKB and ibus, you are going to need to use both systems for input. To do that make sure that the settings Use system keyboard layout and Share the same input method among all applications are enabled, otherwise you will notice how your layout changing shortcut in XKB, doesn't switch to your languages set in your XKB settings