ATI drivers development discontinued in favor of open-source and hybrid drivers. We recommend to use http://www.funtoo.org/Package:Radeon_Video_Drivers instead

Version 14.12-r3 and above now include ATI GLESv2 and EGL libraries, which should improve stabilty with GNOME.

x11-drivers/ati-drivers, often referred to as "fglrx", the name of its kernel module, is the proprietary, accelerated driver for AMD (ATI) graphics cards.

If you are using the default kernel -- one like debian-sources that was built automatically, then you'll want to blacklist a few modules to prevent them from loading and interfering with the AMD Catalyst module. To avoid having the open source Radeon drivers automatically load and ruin your day, create a blacklist file as follows:

If you are building a custom kernel, rather than blacklisting modules as above, you can simply ensure that the Direct Rendering Manager and in-kernel Radeon drivers are not enabled. If you do build them as modules, you will need to blacklist them as above. Also ensure that the following kernel options are enabled.

If you need support for AGP cards, enable the following kernel options:

Add the following to your /etc/make.conf. For more information on the meaning of the VIDEO_CARDS variable, see Video:

If you would like to built the amdcccle (Advanced Micro Devices Catalyst Control Center: Linux Edition), a GUI to configure the drivers, add the following to /etc/portage/package.use/ati-drivers:

If you are using a desktop or workstation profile, this USE flag may be enabled by default. Even if it is, adding it will not hurt anything.

If you allready have emerged xorg-server, all you need to install the drivers is running the following command:

Otherwise, you may install the drivers with:

Before using the driver, ensure that the "fglrx" module has been loaded -- run modprobe fglrx as root -- it should return with no error. If the module can't be found, run depmod -a as root -- then the modprobe command should work. If you are switching from the open source Radeon driver, then shutting down your desktop and rebooting your system (be sure to disable xdm) may be required to get the new "fglrx" module to load cleanly.

Next, set ati-drivers to manage the system's OpenGL and OpenCL implementations. Doing this is particulary important for desktop environments like GNOME, which use hardware acceleration by default. Not doing this will result in the GNOME display manager not being able to start!

Afterwards, run aticonfig to modify the X-server configuration file to work with the ati-drivers:

If you would like to have a full-resolution framebuffer with ati-drivers, check out uvesafb

There are a couple of options for setting up a multi-head display. For some systems, all you need to do is plug in your additional monitor, and it will be detected by your desktop environment, and will work.

If your second monitor does not display anything at all, then play around with your X configuration. Try using the following command to generate a new X config:

You can use the right} option to specify the relationship of the second screen to the first.

For more than two heads, or multiple cards, you can use the following approach to generate an appropriate X config. First, list adapters to see what adapters are available:

Now, a variant of one of the following commands to generate an X configuration for your needs:

One you have your displays enabled so that your mouse pointer can move to all displays, you still may not be able to drag windows to certain monitors. In this situation, each monitor is probably configured as a separate X screen, and you'll need to use the Catalyst Control Center amdcccle GUI configuration tool to tie them together. The Catalyst Control Center is installed when the qt4 USE variable is enabled.

Open up a graphical terminal, and become root by typing su - -- your user will need to be in the wheel group to do this: 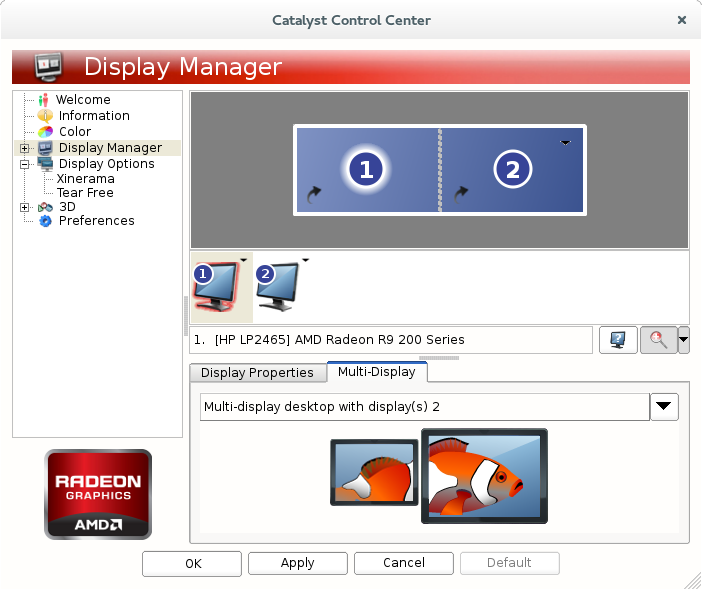 Navigate to Display Manager, and choose the option Multi-display desktop with display(s) X for each display. Then, drag and drop the blue displays to arrange them to match how they are arranged in front of you. Click OK. The Catalyst Control Center will tell you that you will need to restart your system for the changes to take effect. Simply log out if you are running xdm, or end your X session, and start it up again. You should now have a fully-functioning multi-head display.

I am using a HDMI connection, and my monitor's display has a black border around it.

You will need to restart your X session for the changes to take effect. If you are using a display manager, logging out and back in again should cause the new settings to be visible.

The tabs in Google Chrome are becoming garbled/corrupted

Compton with backend glx does not work well with ati-drivers